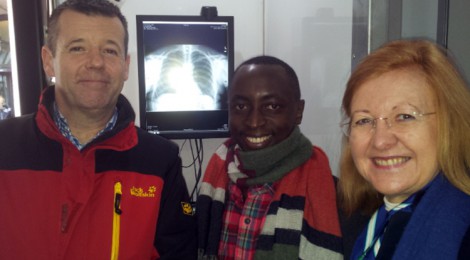 The Mayor of London Boris Johnson has appointed award-winning actress Emma Thompson as his TB Ambassador in a bid to raise awareness of the disease which is more prevalent in London than any other capital in the developed world.

The appointment comes as Public Health England and NHS England announce an £11.5 million investment to tackle TB cases over the next five years and as University College London Hospitals (UCLH) launches a unique mobile ‘Find&Treat Service’ health unit which will travel across the capital to help diagnose TB and other infectious diseases.

The campaign is of personal significance to Emma Thompson whose son Tindy Agaba was diagnosed and treated for TB by UCLH doctors. Tindy will join Deputy Mayor Victoria Borwick and UCLH staff to launch the van at Portcullis House in Westminster today (19 January).

In 2013 there were 7,290 TB cases reported in England, an incidence of 13.5 cases per 100,000 of population – just under 3,000 of these were in London. The UK has the second highest rate of TB among Western European countries and rates are nearly five times higher than the US. TB is concentrated in large urban centres with TB clinics in London managing more cases a year than those in all other western European capital cities put together.

The Mayor of London Boris Johnson, said: “I am thrilled that Emma Thompson has agreed to be a TB Ambassador for London, lending her immense talent and enthusiasm to help raise awareness of this disease. Emma is passionate about taking action against TB following the experience of supporting her son through the diagnosis and treatment of this illness. I look forward to working closely with Emma to support vital projects that work to help Londoners with this debilitating condition.”

Emma Thompson sent a message of support to the launch today, saying: “I regret I am unable to be with you today for what is an important landmark in the battle against TB in London.  However, I am delighted that my involvement in this fight will be ongoing as the Mayor of London has invited me to be his TB ambassador to highlight the action we need to take to fight this disease, a disease of which I have personal experience.  My son Tindy is with you this morning and his experience of being diagnosed and treated for TB is one of the reasons why I am committed to this cause. You here are all aware of the scale of the problem and that this great world city, London, has the unenviable title of being the TB capital of the developed world. The service provided by the Find&Treat van is invaluable and it clearly demonstrates that we can reach all sections of the community if we try. The scale of TB in London is a genuinely alarming situation that can and must be addressed and I look forward to supporting you all in this this work in the coming months and years.”

Deputy Mayor Victoria Borwick, said: “This mobile health unit is set to make a real difference to Londoners’ health especially in the on-going campaign to diagnose and treat TB. I am delighted to be joined by Tindy who has personally suffered from TB and is now committed to helping others receive successful treatment. This unit will provide an invaluable service to our capital and help to tackle this disease.”

The Find&Treat Service has been redesigned by UCLH to provide a ground-breaking mobile health service unit capable of testing and vaccinating for a range of serious public infections including TB, HIV and Hepatitis C – all of which are on the rise across the capital.